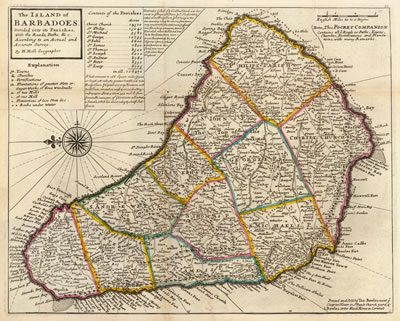 The island of Barbados is located at 13.4ºN and 54.4ºW and is situated in the western area of the North Atlantic Ocean and 100 kilometres east of the Windward Islands and the Caribbean Sea. The island is seen by most scientists as geologically unique as it was formed as a result of an amalgamation of two land masses over a period of many years.

The peaceful Arawaks and the more ferocious Caribs were the first inhabitants of Barbados. However, when English Captain, John Powell arrived in 1625, the island was uninhabited and as a result he claimed it for King James I of England. Powell soon returned to England to put the necessary plans in place and subsequently returned to Barbados in February of 1627 at the site which is now known as Holetown.  The island was given the name Los Barbados after strong similarities to the ficus trees on the island whose aerial roots look like beards.

Slavery in Barbados was a time of absolute oppression. The importation of African slaves took place at a time when the insufficient work force supplied by the white British indentured slaves needed to be aggressively looked into. These slaves were subjected to a most treacherous journey across the horrifying “Middle Passage” of the Atlantic. 1640 – 1807 saw hundreds of thousands of African slaves enduring this journey and no real guarantee of all making it alive.  Tobacco and cotton were initially cultivated by the colonists but by the 1640s they had fully transitioned to the sugar cane industry. Sugar cane production in Barbados dominated the other sugar industries in the Caribbean as sugar plantation owners on the island were very powerful and successful businessmen.

The sugar industry continued to do well as a result of the hard and intense labour that was supplied by these many slaves to the island. The importation of African slaves resulted in a very highly imbalanced ratio of slaves to their white masters. Despite this imbalance, white masters were still able to get as much production as possible and even more from these slaves as they (white masters) were so very controlling and intimidating.

The occurrence of a few natural disasters in Barbados throughout the late 1600s caused much unwanted financial problems for the industry. However, despite the setbacks, heavy investments of sugar and slaves still continued throughout the island.

Sugar proved to be greatly profitable for Barbados and became the island’s main crop which resulted in many slaves being brought in from Africa to work on the sugar plantations. This increase in slaves from Africa saw a rise in the black population on the island.

By 1720 the sugar industry in Barbados was no longer a commanding force to be reckoned with as countries like the Leeward Islands and Jamaica had outdone the island.

Barbados’ very first Parliament was held in 1639 and made it the third oldest in the Commonwealth, after the British House of Commons and the Bermuda House of Assembly. English law and traditions held strong roots in Barbados’ legal system. Such was the extent of these roots that the island was soon called “Little England.”

The courts of Barbados comprise exclusively of local legislation and are responsible for governing the laws of the country.

The judicial system comprises a lower Magistrates court and the Supreme Court, which includes a court of Appeal and a High Court.

The legal and judicial system fall under the responsibility of the Attorney General.

Final appeal from Barbadian courts used to be to the Privy Council in England. Since the establishment of the Caribbean Court of Justice (CCJ), based in Trinidad and Tobago, the CCJ has taken over from the Privy Council.

After being a British colony Barbados moved toward the institutionalization of an independent nation. 1834 saw the emancipation of slaves, 1944 saw women being allowed their constitutional right to vote and 1951, the year of universal adult suffrage. With the birth of the two-party system and a cabinet government during the 1950’s, Barbados was well prepared for independence which was granted on November 30, 1966.

< Back to The Island